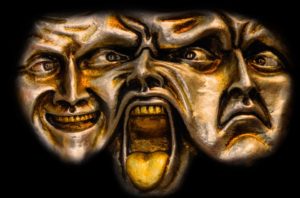 The most shocking truth of human reality is that we are a form of biology and as such are driven by the physics that makes the chemistry happen. What can and does make us unpredictable in certain ways is how such chemistry can be altered. We’re talking about subtle influences such as thermal currents in a brain cell! When realizing that qualia of experiences relate to emotional reactions, we see how important this feature of our brains is. To give a machine something similar as to how it would make decisions based on the emotional reaction it anticipates or has experienced might give some pause to create such a machine. After all who wants a car that doesn’t feel like driving you to work on a particular morning?

So what’s the point of building an emotional machine? The notion goes towards the objective of our goal and that is to build a machine that can relate to human beings. To relate to humans the machine should have emotions or at least mimic the signal patterns that emotions respond to as we interact in the environment. Currently, those software tools or applications that try to recognize human facial expressions and associate them to words that identify or describe emotions can not relate to humans! They are no different than your PC where you type on your keyboard and it responds according to its programming with a specific response. Some think that’s all machines need to do and that humans will then anthropomorphize how the machine responds. But such strategies quickly fall into the uncanny valley as the response becomes very repetitive and many times incoherent.

Ultimately emotional machines will be much more relatable to people and perhaps to a degree that’s not comfortable, a flip of the uncanny valley if you will, and because it’s so human-like it causes an adverse reaction. On the other hand, they could be integrated into family or be guardians of the elderly that provide emotional support similarly to pets.